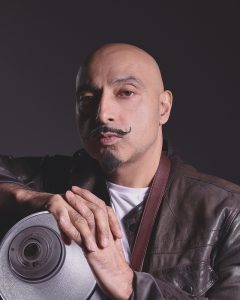 Shahid Bashir is the originator of the ’Diversity Works’ photo narrative project., which examines the ‘diversity proposition’ through a series of portraits and perspectives from, business and thought leaders, managers and agents of change.

– How is diversity actually perceived and experienced within the world of work?

– What is the positive core and the real value that diversity brings?

– What are the negative stereotypes that are associated with diversity?

– What are the conditions under which diversity can flourish in organisations?

The body of work, which began in 2015, challenges misconceptions and expounds on the value of rethinking leadership, culture and behaviour to develop people, processes and systems that are inclusive and facilitate difference in the broadest sense of the word.

The series consists of a collection of fine art, photographic portraits which have been taken in a particular style moving away from the happy, smiley corporate portraits we are all used to seeing. Instead, they incorporate a contemporary black and white, deadpan format as contributors are asked to reflect on a specific moment in their lives when they were excluded, or felt left out and how this made them feel.

The intention is to create drama by shifting the sitter to take the position of the outsider; To provoke curiosity by capturing the subject in a way they are not used to being seen, by themselves and their peers. To seize the viewers’ attention with a degree of intensity and to personify the idea that the concept of equality, diversity and inclusion, is not merely black and white it’s more about the shades of grey in between.

The imagery is accompanied by a powerful narrative prompted through a consistent format as each contributor has responded to three prompts;

The statements provide thought-provoking insight revealing a series of fresh perspectives,  reflecting the nature and spirit of diversity, all quite different yet linked with a binding thread of underlying connectivity. They act as a basis for new conversations on the value of diversity, what diversity isn’t and under what conditions it flourishes acting as a catalyst for culture change.

In the summer of 2015 exhibitions and commissions began with the first at the Law Society followed by Mansion house, Linklaters LLP, KPMG UK and Thomson Reuters. The body of work grew in 2016, with Dowshan Humzah facilitating introductions across a wider range of sectors and exhibitions continue.

“As an artist/consultant, I firmly believe it is critical to be innovative and creative to increase engagement, dialogue and understanding of how equality, diversity and inclusion are the cornerstone to establishing integrity in business. My overarching goal is to move the agenda out of the backroom into the board room and to place it at the heart of the corporate planning process”.     Shahid Bashir

Acknowledgements:
“I am ever so grateful to all participants for their valuable contributions, especially those early supporters who engaged with me and the idea without knowing exactly where it was going.
Thank You!

I would like to extend  a  very special thank you to Dowshan Humzah,  who facilitated introductions to a number of contributors, whilst helping me to get organised to launch this website;

Shahid attended St Martin’s School of Art and Parsons School of Design in New York, studying Fashion, Photography and Illustration. After graduation, he did the fashion, music and art thing before opening an art space in the Brick Lane area of London. The purpose of gallery was to examine the British Asian experience as it evolved through fashion, music and art working in collaboration with Talvin Singh (Mercury music prize winner 1999).

He was approached by Arts Council England and agreed to become involved in their drive to make the arts funding system more accessible and inclusive. With a remit spanning the nine English regions he managed an array of schemes, working with policy makers to affect change from the inside. Similar engagements were to follow working with the Victoria and Albert Museum, the London Development Agency and the Greater London Authority where he set up and managed a seminal, national business diversity programme.

It was during this period he also created his first artistic expressions; Illusion of Inclusion, Straight-jacket of Terminology and Fornication of the ‘I’.

Shahid then re-positioned himself to create work which reflects his authentic self combining his experiences across different domains, thus; the ‘Diversity Works…’ portrait project was born, ( www.diversityworks.co).

Diversity Works gave rise to his practice as a business psychologist; i.e. creating workplaces where people can flourish, and a visual artist. The project provided a platform for his lifelong preoccupation with plight of the outsider and his experience of managing culture change. He recalls, “The expectations and perceptions of other’s can be a very powerful force in shaping who we become and informing how we behave, for years I worked on affecting culture change, then I woke up one morning and realised that processes and systems had changed me – I had to step away and reclaim myself”.

He is now creating a multitude of new projects translating his aesthetic to a wider context where the notion of the authentic self, exploring stories of the world within us and what drives behaviour pervades his work. To date, he exhibits mostly within the receptions and congregational areas of large organisations always creating a strong interactive element to his photographic installations, they are engagement pieces that facilitate self reflection, reveal fresh perspectives and start new conversations.

Shahid’s wider portfolio can be seen at www.shahidbashir.co.uk